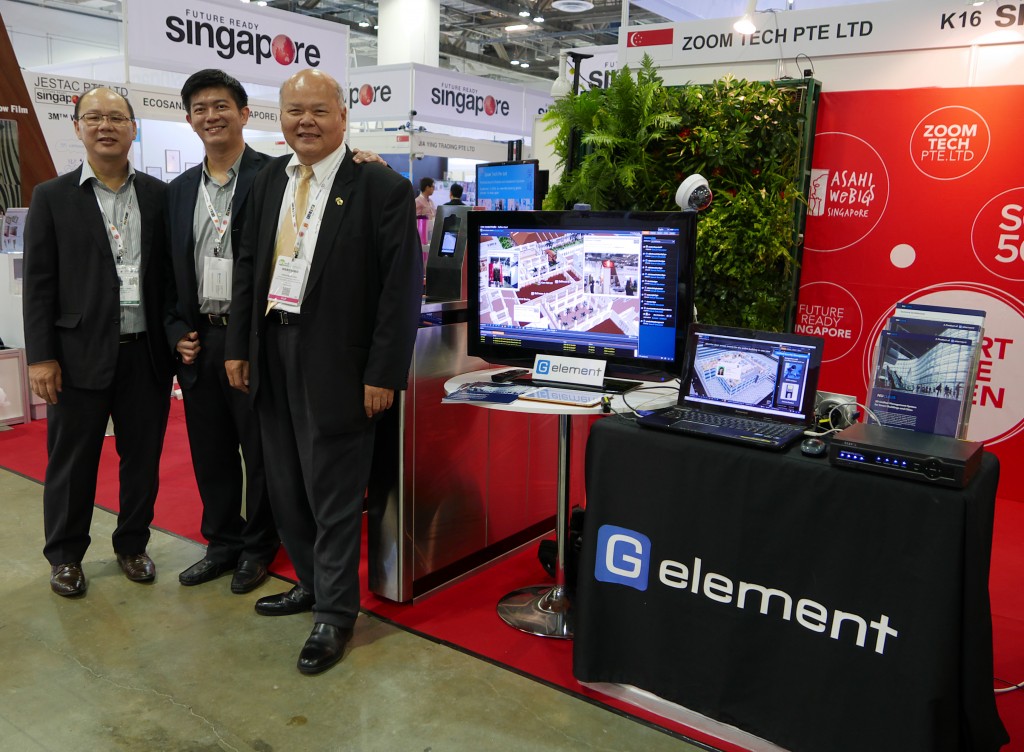 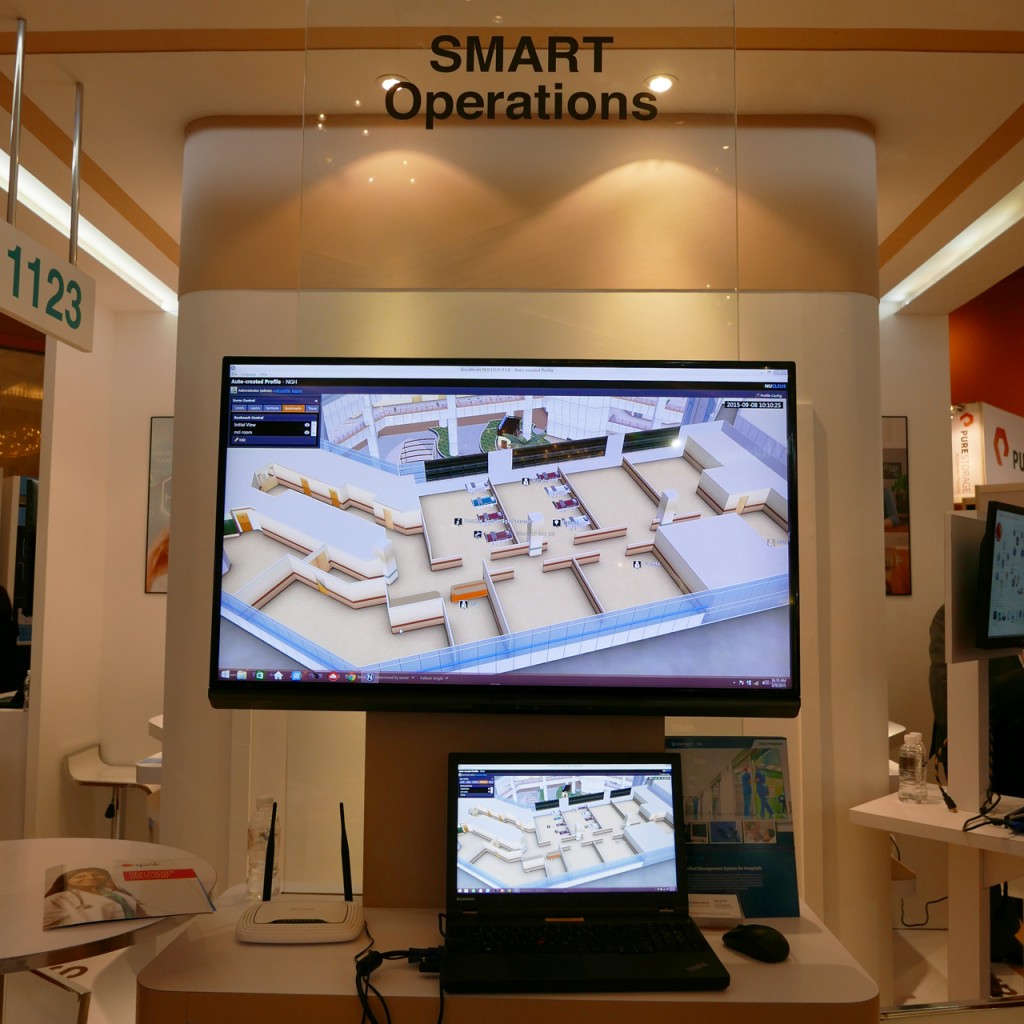 G Element had a successful exhibition showcasing NUCLEUS as a smart 3D unified healthcare management solution at the HIMSS AsiaPac15. We thank all those who took their precious time to join us at the event held at Marina Bay Sands Ballroom, 6-10 September 2015. With SMART Healthcare as one of the critical indicators of a SMART nation, Asia is moving towards becoming highly digitalized and connected. G Element, together with NCS presents NUCLEUS – a smart 3D unified management platform for the hospitals. 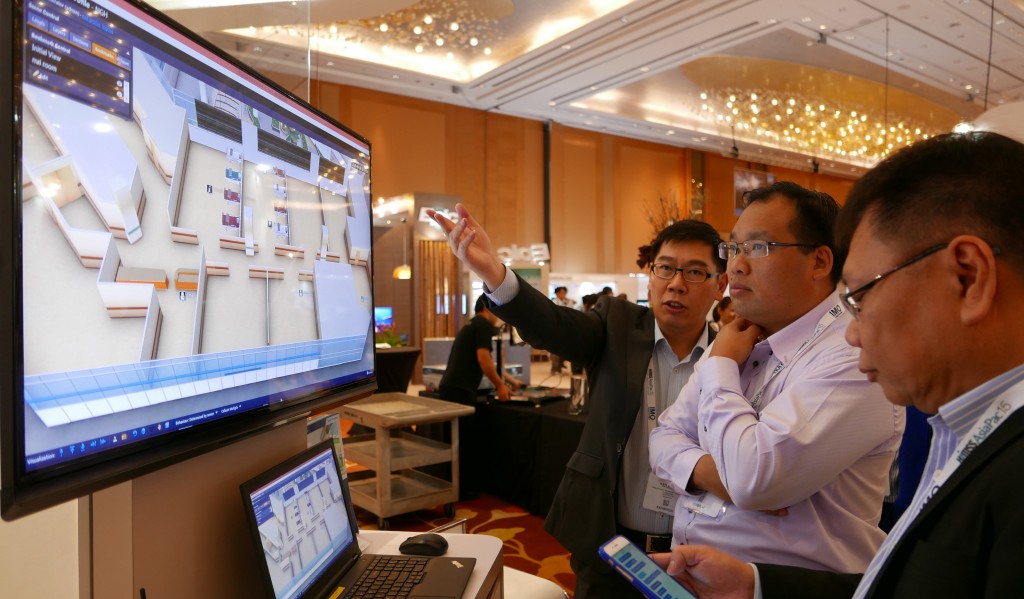 Using RFID tracking technology, patients, medical staff and even medical equipment can now be easily tracked and traced on NUCLEUS’s 3D visualization of the premises. High dependency inpatients can be better monitored, with NUCLEUS immediately informing medical staff of any falls or weakening vital signs detected.

Combined with bed management system, NUCLEUS improves bed cleaning services, so that highly demand beds can be made available sooner. On the overall, higher management can also get a comprehensive situation awareness, improve coordination between teams and shorten response time, lightening load on need for manpower. 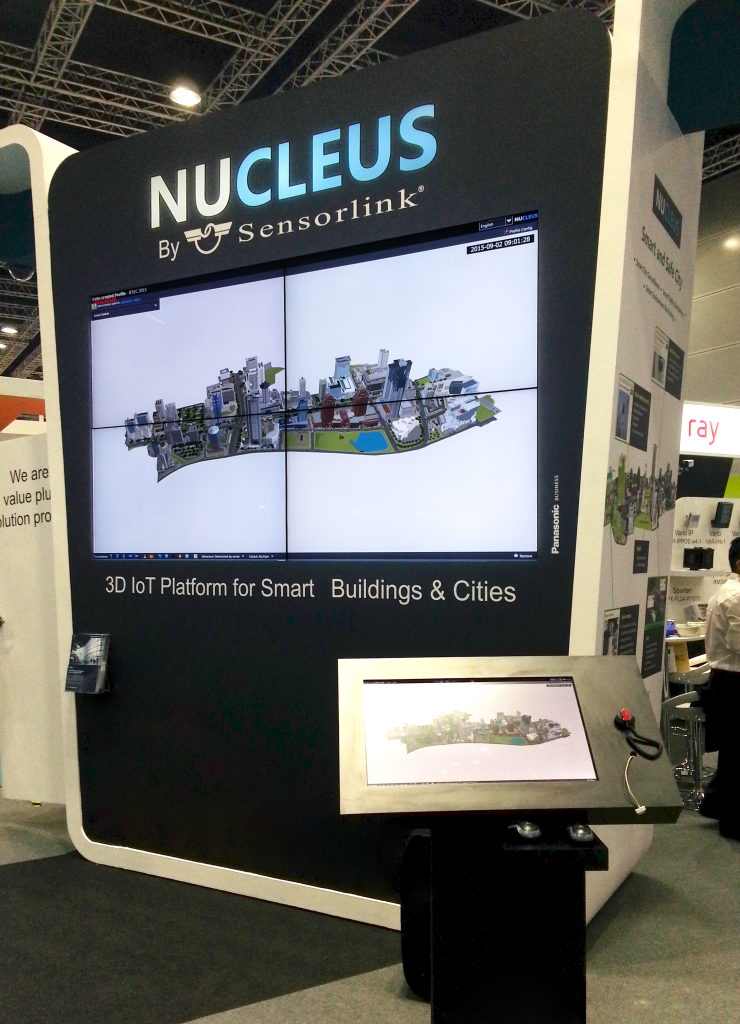 G Element had a successful exhibition showcasing NUCLEUS as a smart 3D unified safe city management solution at the IFSEC Southeast Asia 2015. We thank all those who took their precious time to join us at the event held at Kuala Lumpur Convention Centre, 2-4 September 2015. With the increase in terrorist attacks, countries are looking even more closely at security, fire and safety issues in the cities. As Asia moves towards the era of SMART Nation, security management becomes digitalized, and together with data analysis, security risks are more easily identified. 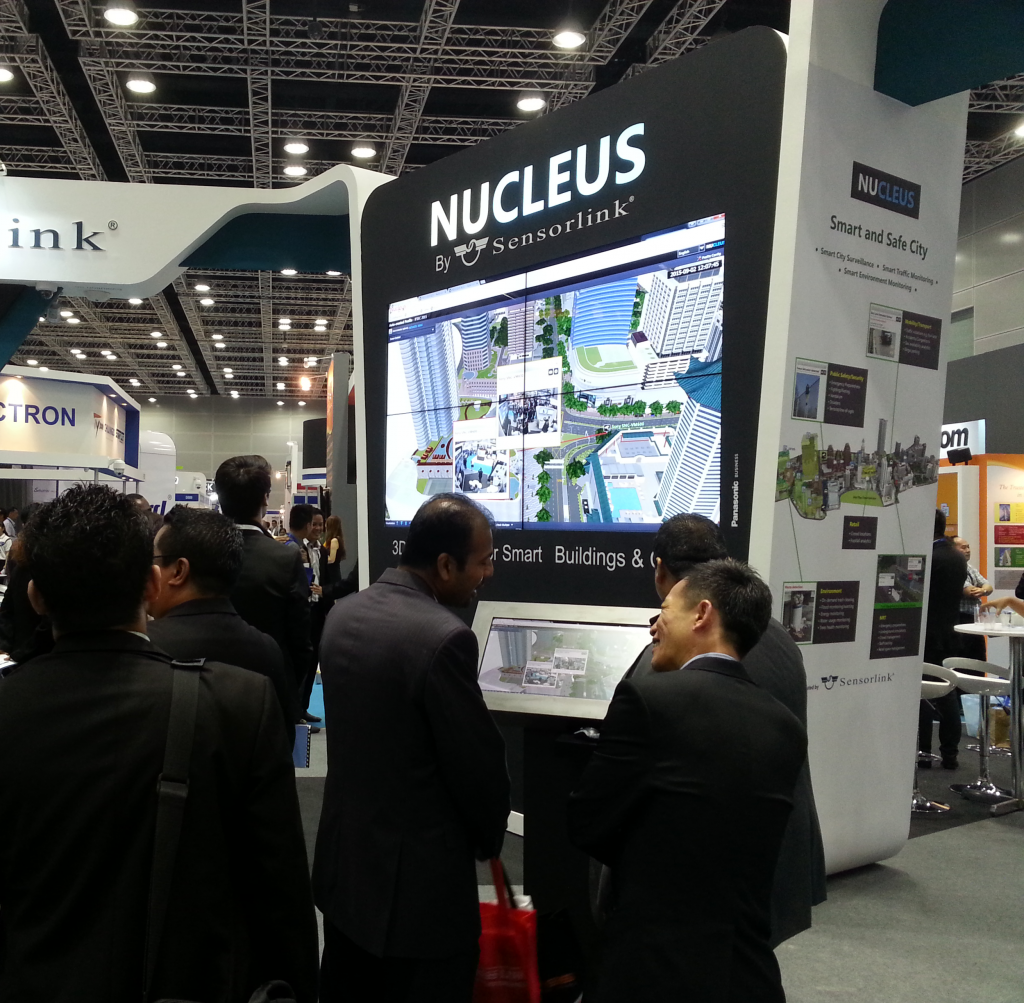 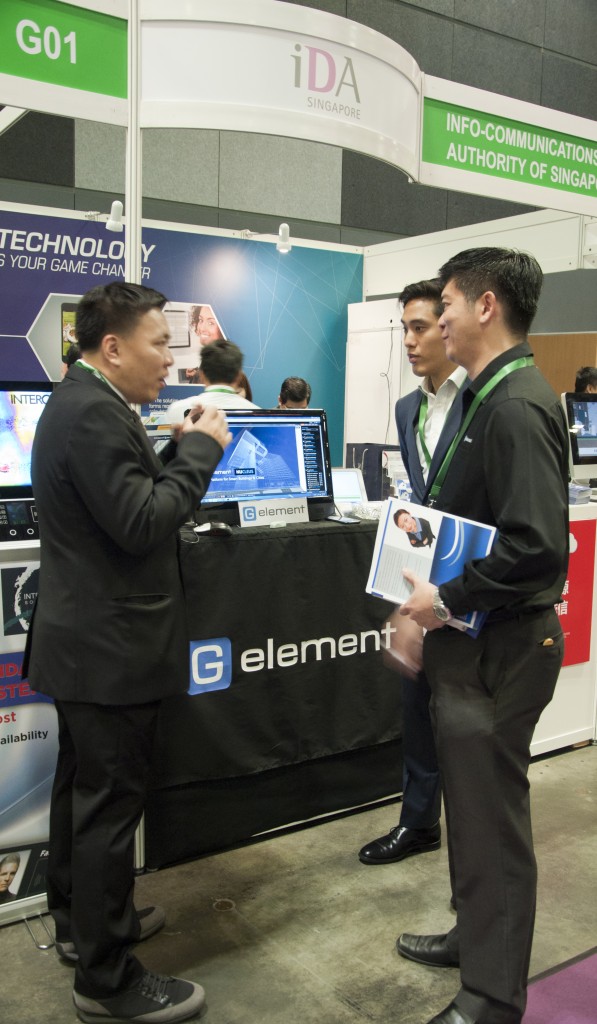 G Element had a successful exhibition showcasing NUCLEUS as a smart 3D unified management solution at the 18th Incomm Commerce Conference. We thank all those who took their precious time to join us at the event held at Suntec Singapore Convention & Exhibition Centre, 19-20 August 2015. 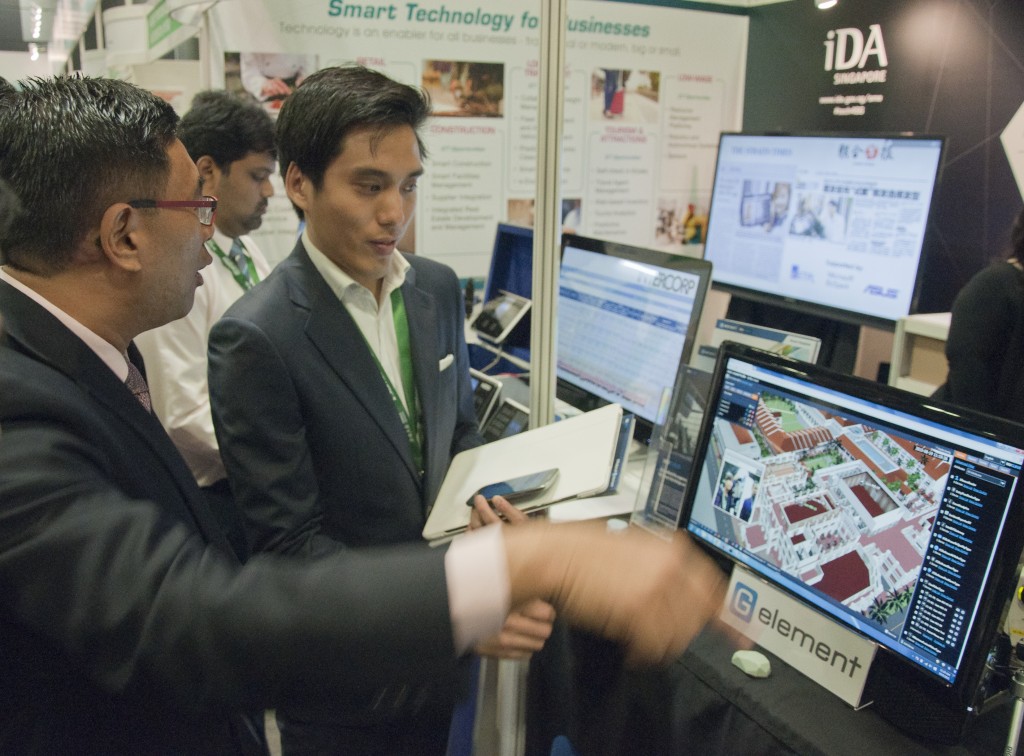 With the cut in low wage workers e.g. security guards, cleaners etc., small medium enterprises are looking for ways to improve productivity even with a reduction in manpower. At the exhibition, NUCLEUS’s open platform has been showcased to allow full integration of security management, allowing CCTVs with video content analysis to be fused with unified 3D model of building, improving location interpretation and reducing need for physical patrols and guards. Hence even with a smaller security team, command center can still maintain real-time monitoring of premises and deploy security staff more efficiently. 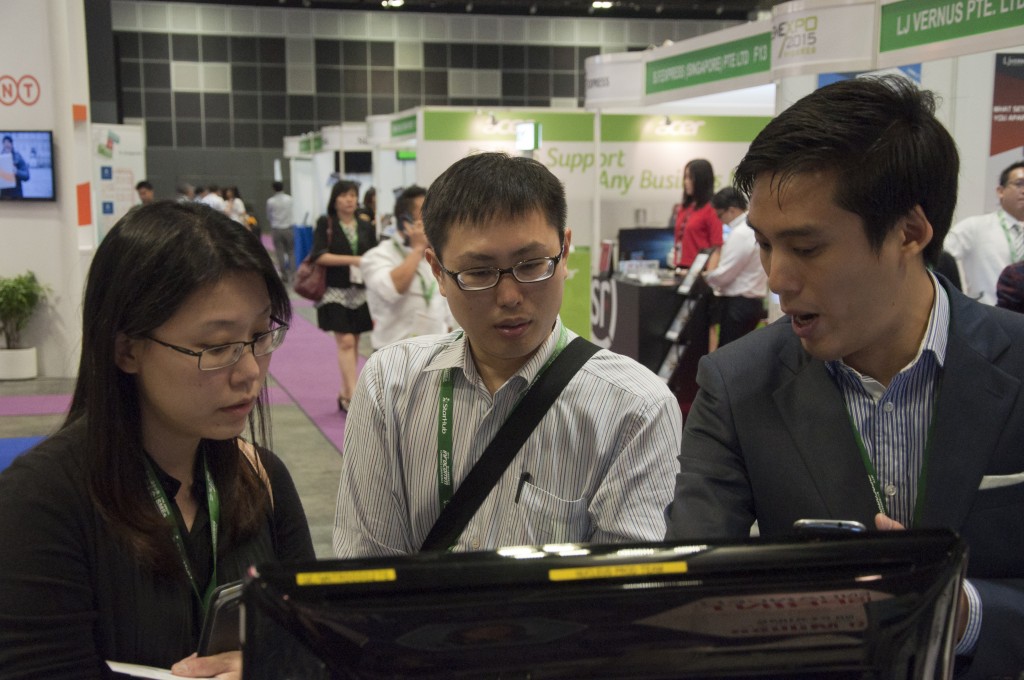 G Element had a successful exhibition showcasing NUCLEUS as a smart 3D security solution at the Australia Gaming Expo. We thank all those who took their precious time to join us at the event held at The Sydney Exhibition Centre, 11 – 13 August 2015. G Element had a successful exhibition showcasing NUCLEUS as a smart 3D security solution at the Malaysia SAFE 2nd National (Security) End-users Seminar. We thank all those who took their precious time to join us at the event held at The Royale Chulan, 4 August 2015. 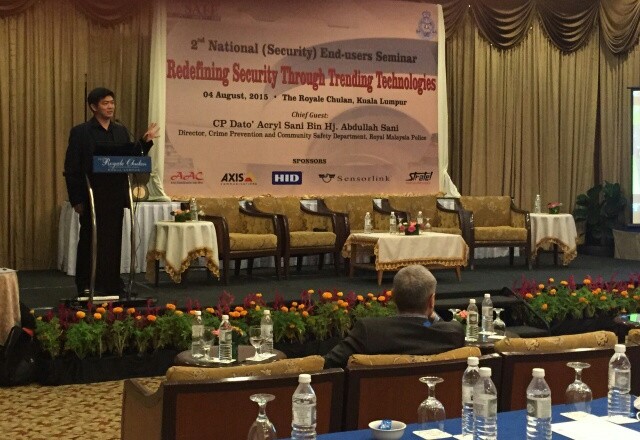 Security system is now unified in one situational view, where CCTV feeds can be viewed in relation to the 3D model, giving a strong sense of correlation of CCTV feed to location of the CCTV. Together with video analytics that helps to monitor situations around the clock, security operators can swiftly pin point security breaches in a building/city, easily access large amounts of data across various systems through one single platform and quickly response to situation with the best solution.

The Microsoft Partner Showcase – 29 May 2015, One Marina Boulevard, L21 Auditorium G Element had a successful exhibition showcasing NUCLEUS as a 3D unified management system for patient tracking at the Microsoft Partner Showcase. We thank all those who took their precious time to join us at the event held at One Marina Boulevard, 29 May 2015. NUCLEUS being a 3D unified management system, interposes real-time data avalanche of sensor networks with 3D building information to provide comprehensive situation awareness to premise managers. In the context of hospitals, there are many challenges in handling patients and logistics. By integrating suitable sensors for patient tracking, NUCLEUS helps to capture, process and analyze important data that can help in improving both frontend and backend operations. Problems such as long waiting time for consultation is a frequent gripe among patients. Sometimes treatment may involve visits to multiple stations which are located at different parts of the hospital. By integrating wrist-based wearables for patients into our NUCLEUS IoT platform, data of patients whereabouts can be collected, allowing hospital staff to:

– provide wayfinding to guide patients in their treatment

– perform contact tracing in the event of a contagious outbreak 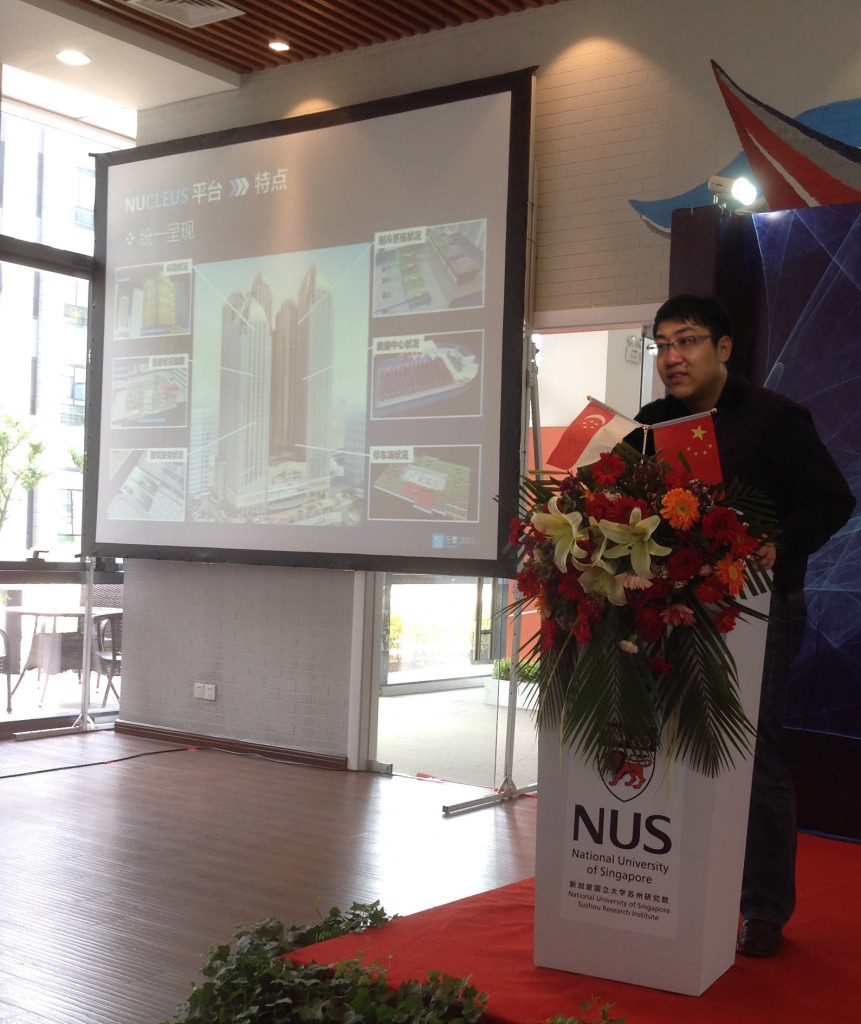 In collaboration with Digital China, G Element has exhibited how digital positioning technology can be applied in business and industries to improve work accuracy, efficiency, safety and enhance the competitiveness of enterprises. Using RFID technology, personnel, assets and workflows can be tracked at workplaces. Paired with 3D visualization from NUCLEUS, locations of personnel wearing RFID watches can be tracked to ensure their safety. Locations of valuable assets can also be easily tracked and any illegal movement of asset from compound will be immediately logged down and reported by NUCLEUS. At the exhibition, G Element has exhibited how NUCLEUS aids Singapore in growing as a Smart City, while making premises smarter. 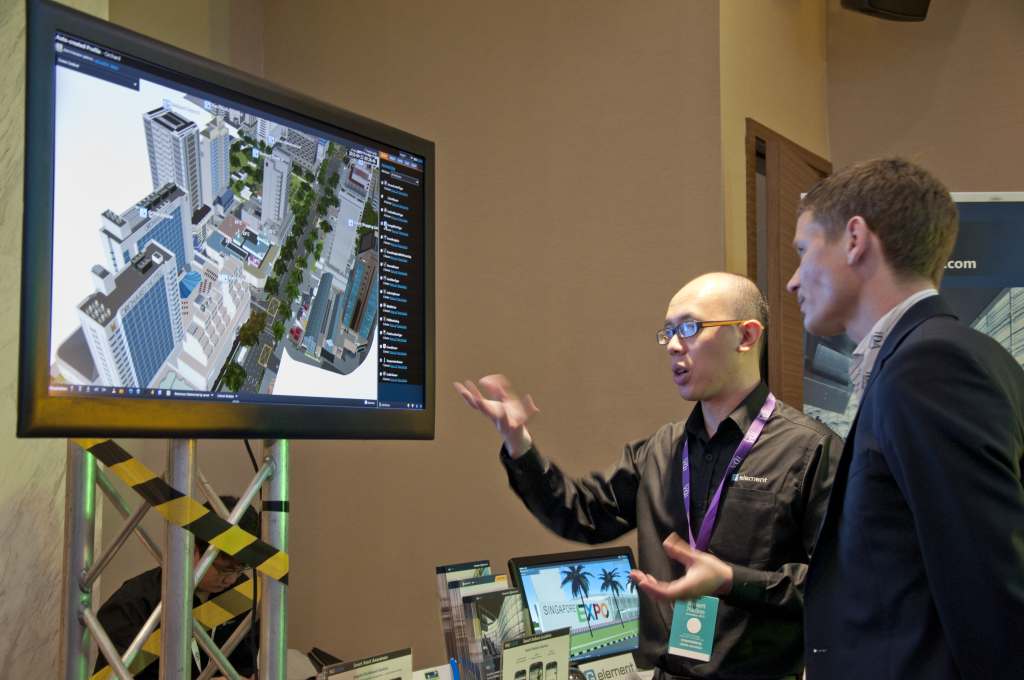 In our Smart Premise showcase, NUCLEUS incorporates data to showcase how building managers can improve workforce productivity and efficiency based on unified situation awareness, via faster incident response and more effective decision-making. For example, guided by alerts from cleanliness detecting hygiene-related sensors, cleaning works can now be deployed only on-demand, allowing management to dynamically prioritize and reschedule the cleaning process of a building, thus reducing the need for manpower especially in a scarce-workforce environment and achieving savings in water and energy usage. G Element had a successful exhibition showcasing NUCLEUS at Internet of Things Asia (IoTAsia) 2015. We thank all those who took their precious time to join us at the IoTAsia 2015 held at Singapore Expo, 8-9 April 2015.

At our main exhibition booth, NUCLEUS has been showcased to be applied in Smart City/Building/Precinct through web, tablet and mobile application to make Singapore a Smart Nation.

On top of the main booth exhibits, G Element together with I²R has exhibited a Virtual Concierge Solution, where toilet cleanliness, outdoor car park and taxi queue can be monitored. Together with ADLINK, NUCLEUS has showcased a smart factory application where conditions such as room temperatures, fan speeds, machine inspections etc. are monitored. G Element’s MD, Mr. Yeow Shinwe had also been invited to speak at the end-user conference, where he shared valuable insights on IoT projects and adoption experiences in the Smart Buildings, Infrastructure and Urban Project sector.