According to ESG (The Enterprise Strategy Group) Research Report, Security Management and Operations: Changes on the Horizon, major challenges of 315 security professionals working at North American based enterprise organizations includes: 1. security team spending too much time reacting to problems, 2. lack of security skills within the IT department, 3. having too many security tools, 4. lacking the appropriate level of security intelligence to make accurate and timely decisions, 5. lack of security skills within the security team itself.

This data hints at problems across people, processes, and technology. Security professionals with inadequate skills, support, or security intelligence spend an inordinate amount of their time reacting to problems. Furthermore, with security management becoming increasingly complex, data from a potpourri of disparate security point tools becomes underutilized as it becomes harder to decipher. 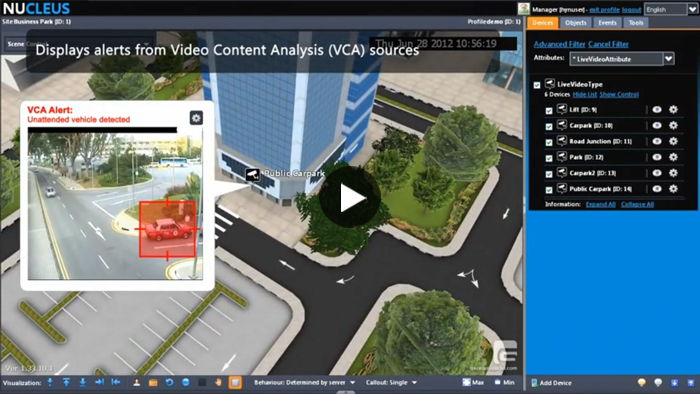 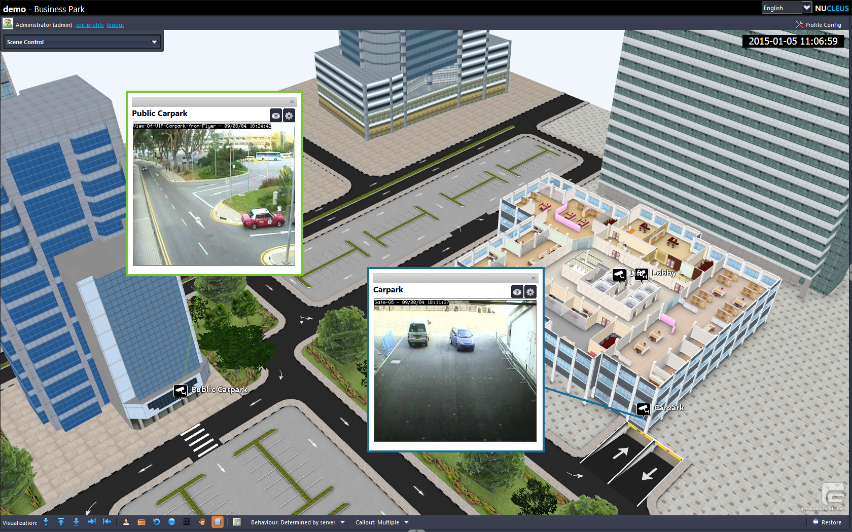 On demand CCTV retrieval and monitoring

1. CCTV monitoring and management
NUCLEUS is integrated with Video Management System to provide CCTV monitoring and management. This allows building managers to use their existing CCTV system, while fusing the data with the 3D building model.
CCTVs are marked in the 3D building model according to their physical locations in the real-world, allowing building managers to intuitively know the location of the CCTVs instead of reading hard to understand CCTV code names. Security personnel can now visually locate all the nearby CCTVs of an incident point in a quick glance. 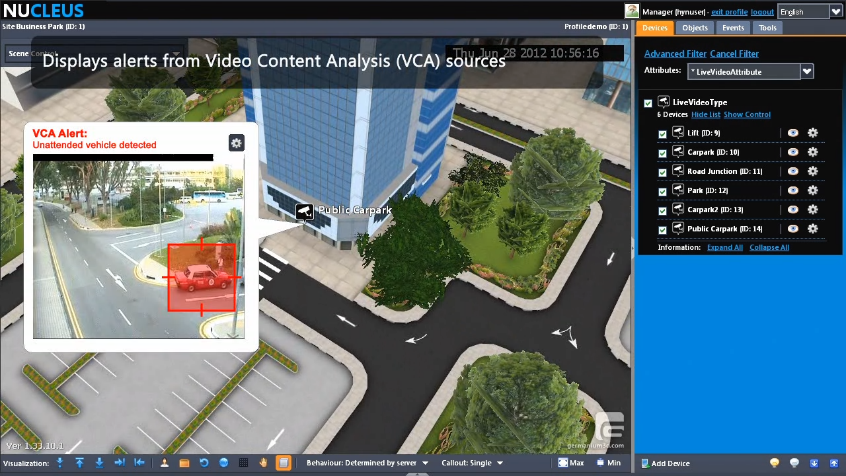 2. Video content analysis and alarms management
Accompanying CCTV monitoring, video content analysis applied on video footages helps to reduce the effort to monitor unusual activities in CCTVs. For example, VCA is able to detect vehicles left unattended at sensitive areas for long periods. Together with an alarm system in NUCLEUS, security personnel gets alerted of the unusual situation, so that necessary actions can be taken to ensure balance is restored. 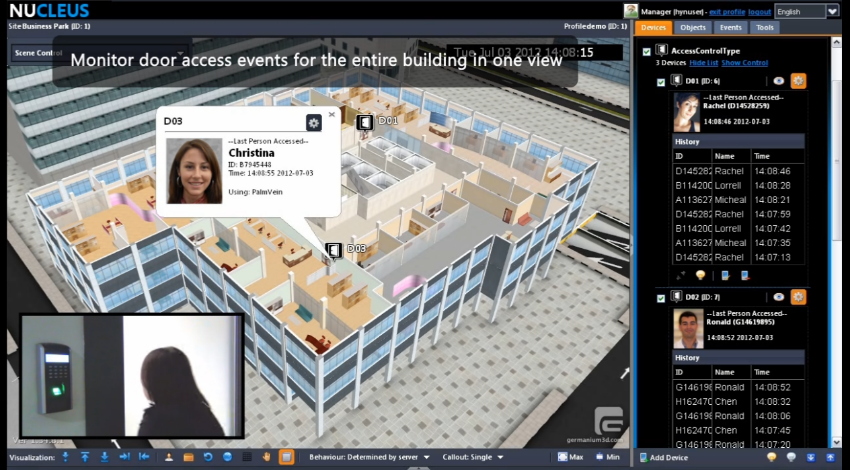 In the event an unrecognized entry is detected, building managers can immediately check the footages of nearby CCTVs to pin point the suspect, and based on the virtual tracked location of all patrolling guards, the nearest guard can be deployed to the scene where the unrecognized entry took place. 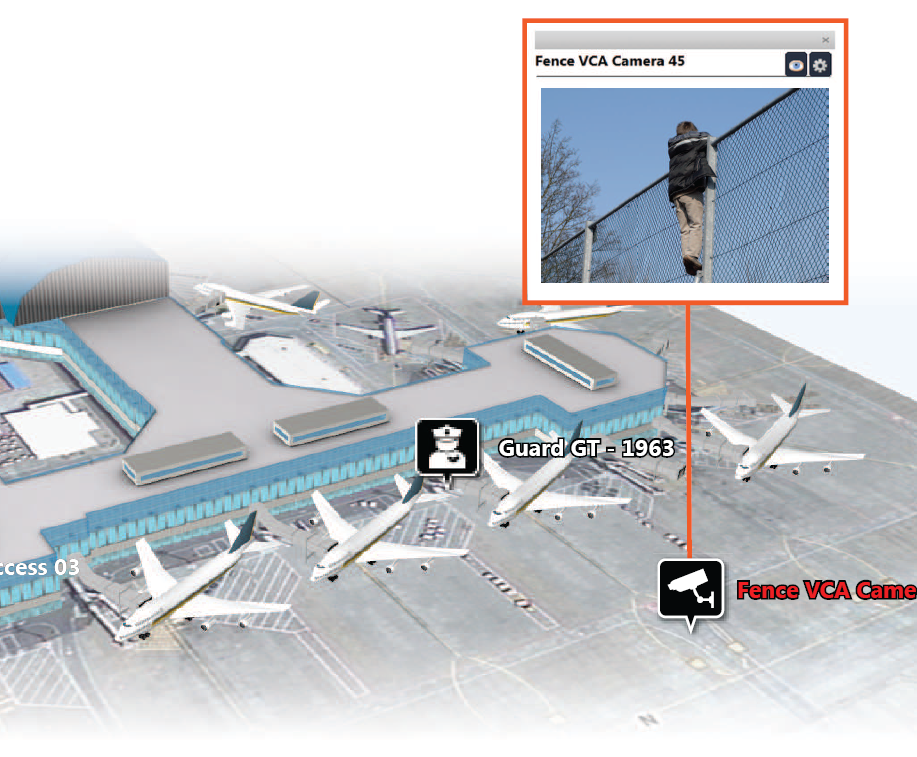 Security personnel can immediately check the footages of nearby CCTVs to pin point the intruder, and based on the virtual tracked location of all patrolling guards, the nearest guard can be deployed to the scene where the intrusion took place to arrest the intruder. 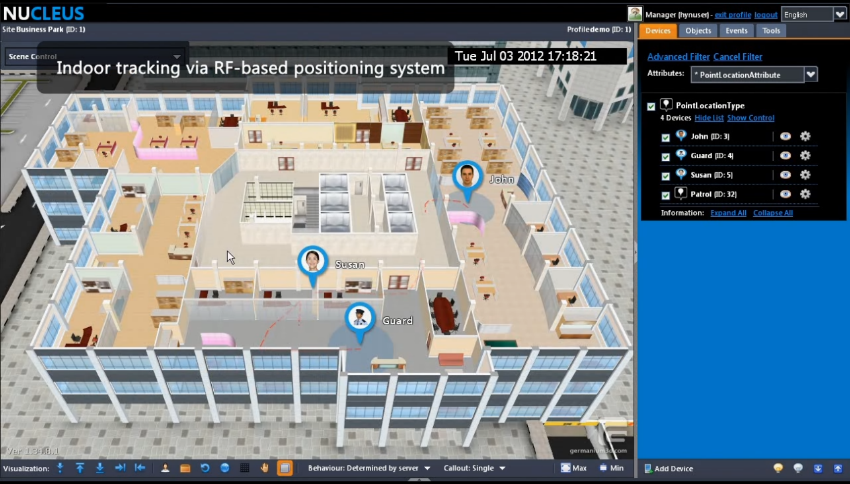 This aids security personnel in ensuring valuable assets do not get stolen from compound, and patrolling guards can be deployed faster to react to situations. Security personnel can also track visitors to ensure that visitors do not illegally access restricted compounds. 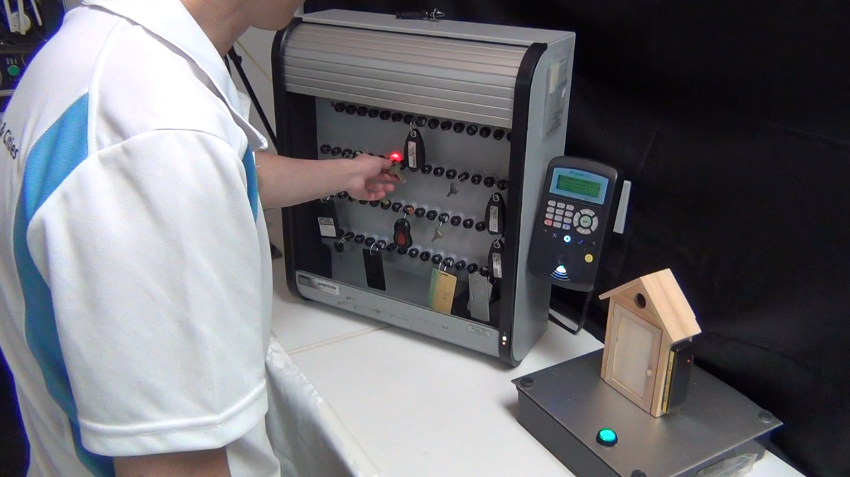 In the event an unauthorized person tries to forcefully draw a key, alarms will be triggered in NUCLEUS, alerting security personnel, who can then call out the footages of the CCTV nearest to the point of alert to help identify the suspect and based on RFID location of the patrol guards, the nearest patrol guard will be deployed to make a swift arrest. 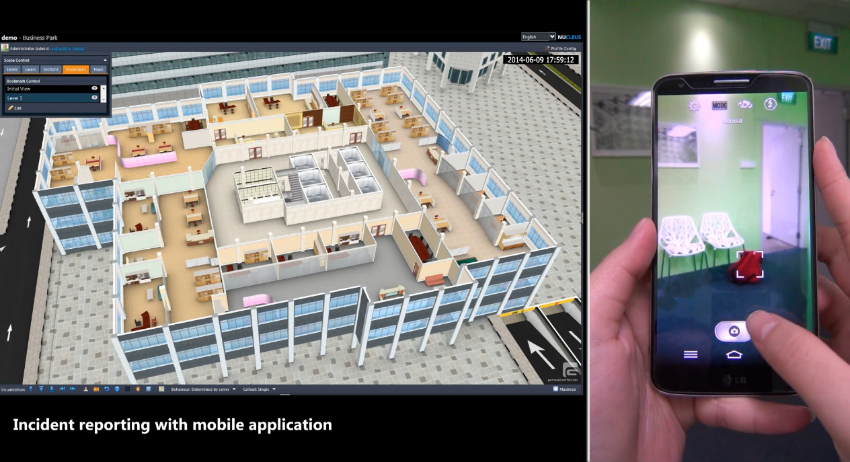 One push emergency button to call for help 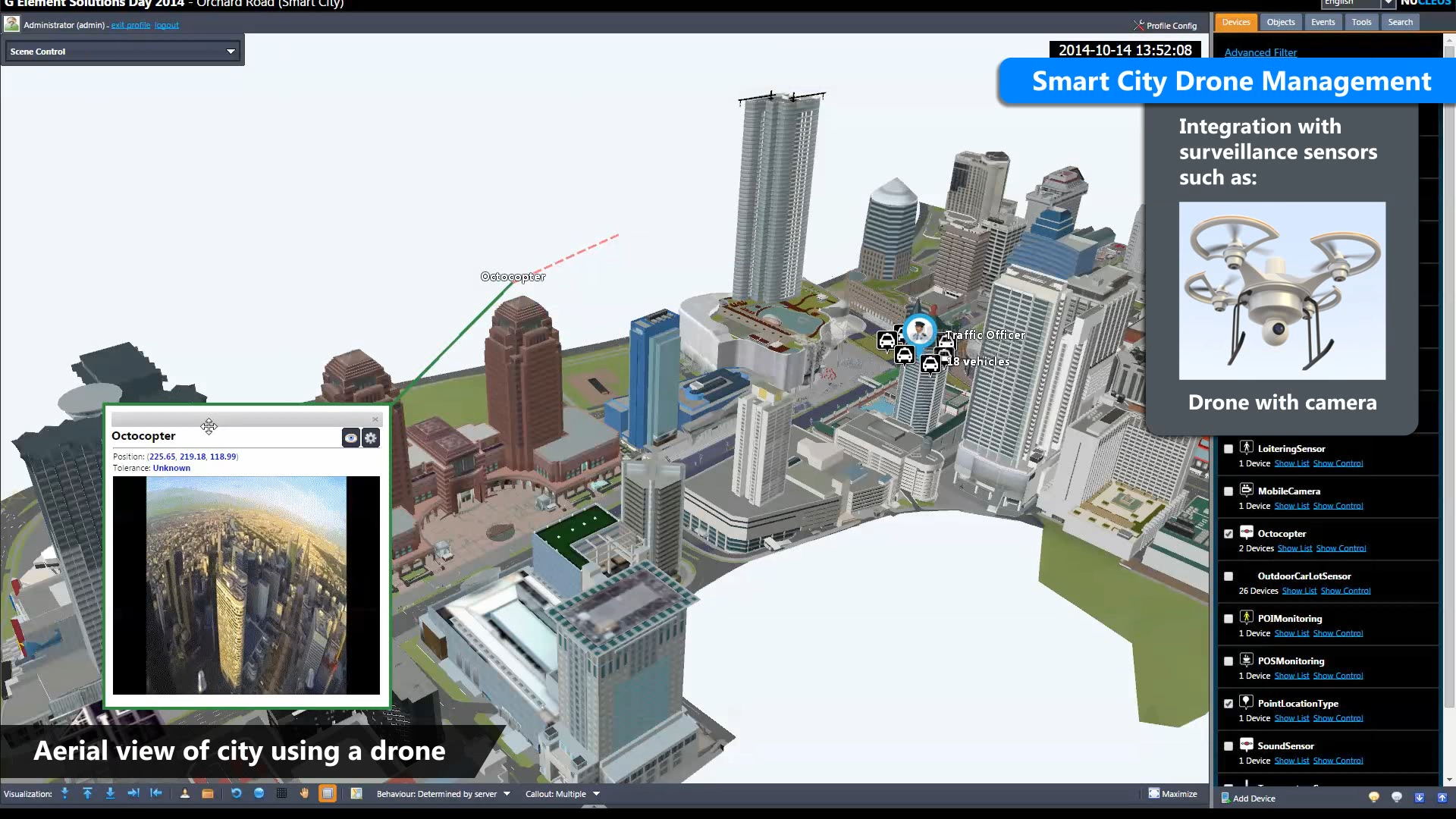 Smart drone surveillance of the city

10. Smart drone surveillance
NUCLEUS integrates and manages smart drones used for city surveillance. From NUCLEUS, operators can view the real-time video footage captured by the drones while tracking the location of the drones, giving operators a consolidated awareness of the situation in the city. 11. Unusual sound detection
As an additional measure for city security surveillance, sensors that analyzes sounds are integrated with NUCLEUS. Unusual sounds like gun shots, screams, explosions triggers an alert in NUCLEUS, indicating the location of the source of the sound, so that security managers can check on the nearby CCTVs for immediate situation updates.
CASE EXAMPLE – NUCLEUS WITH MILESTONE VIDEO MANAGEMENT SYSTEM

Integrated with Milestone XProtect® Video Management System, NUCLEUS fuses real-time CCTV video footages with the building 3D model. Location of CCTVs are marked in the 3D building model according to their physical locations in the real-world. Instead of reading hard to understand 2D maps and trying to match the CCTV code names on the massive video wall, security personnel just need to navigate to the CCTV placemark in the target location and click on the placemark to call out the CCTV footage on demand. Multiple cameras viewing in the locality of interest

On top of on demand video streaming, NUCLEUS also supports fusion of video from Milestone with the 3D scene. Video footage is corrected to the perspective and fused with the 3D model to give a close to real-life view of the scene, from which the direction of the camera, the indoor furniture etc. can be easily deciphered. NUCLEUS has also integrated with Milestone’s alarm system. Alarms such as motion detection triggered in Milestone XProtect system is also reflected in NUCLEUS under the alarms panel. Upon receiving a new alarm alert, both NUCLEUS and Milestone XProtect will reflect the new alert in the system. The two-way alarm management allows security personnel to update the alarm’s status directly using NUCLEUS or Milestone XProtect, and the same status will be reflected in the other platform. 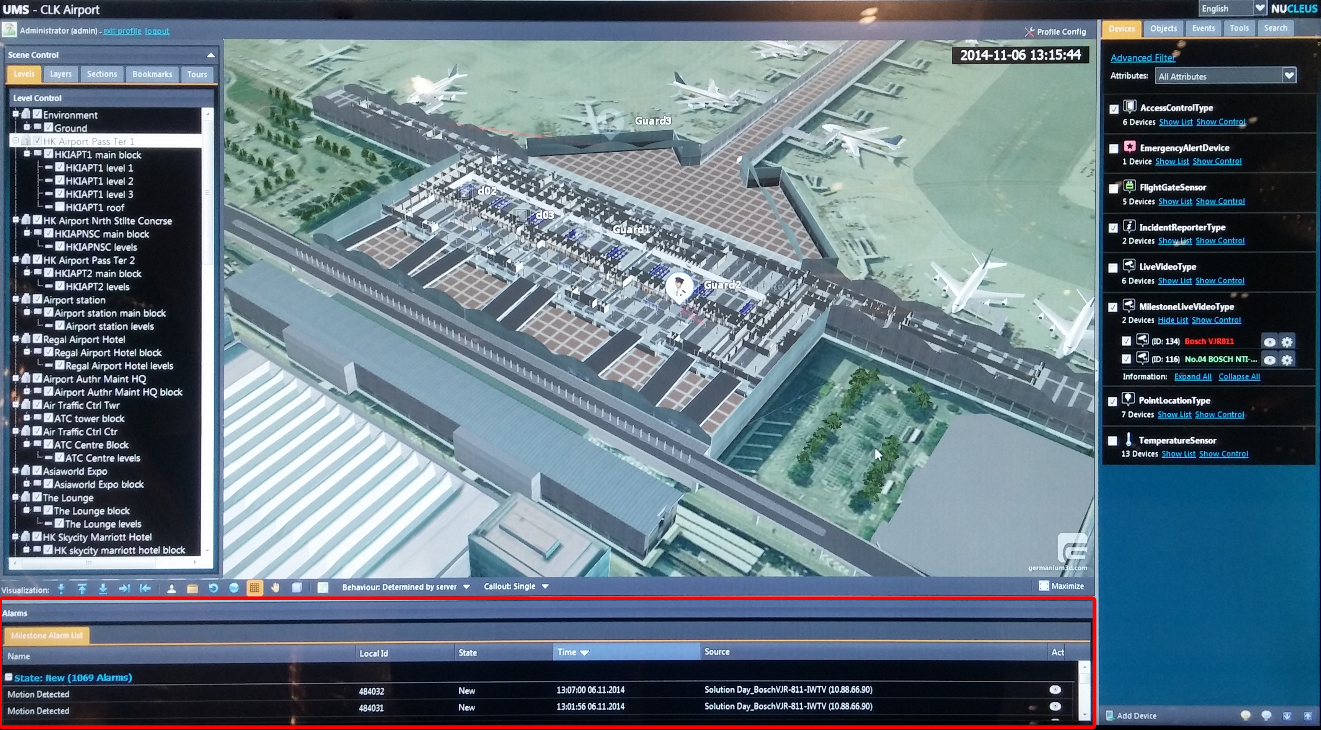 By allowing communication between NUCLEUS and Milestone XProtect, security commander in the control room can select any important camera view and share it with the operators’ matrix monitor, so that the operator’s attention can be immediately brought to the CCTV footage with an issue. 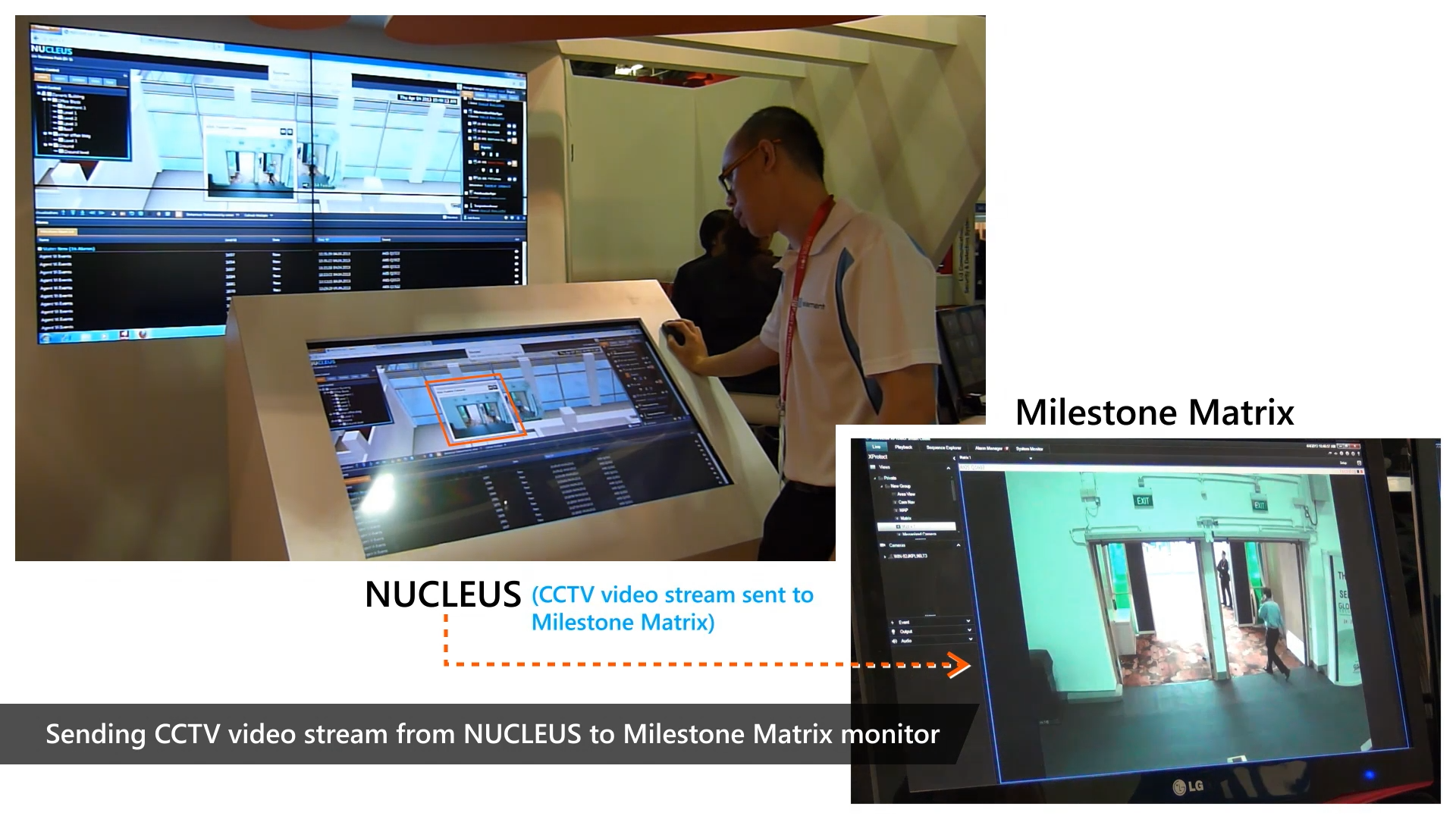 Last but not least, by consecutively calling out neighboring CCTVs footage on a pre-determined route, security personnel can do a virtual guard tour, where he can virtually patrol the premises without leaving the control center. Incorporated with an integrated alarm system, NUCLEUS alerts security personnel when a breach of security is detected across any of the individual systems, e.g. video analytics detected unattended baggage. This active integrated alarm system minimizes the need for constant monitoring. With the location based information, security managers can quickly pin point the problem and the extent of area affected. Alert for detection of abandoned object

Data sharing across sub-systems, allows cross systems interactions. For example, fire alarm raised can be initially verified by calling out video footages of CCTVs neighbouring to source of alarm. Based on RFID tracking of patrol guards, security manager in the command center can easily know which patrol guard is nearest to the source of alarm and quickly deploy him for closer ground inspection. With a 3D environment, CCTV video footage can be fused into the 3D environment to create a virtualization of the actual world, for better relation of video footages to environment. Task such as tracking of people and assets across multi levels which is hard to visualize in 2D becomes a natural within a single window in 3D. By combining bookmarked views with CCTV callouts expanded along a pre-planned route, security guards can virtually patrol the premises from the comfort of the command center without having to walk through the whole premise. Alert for detection of abandoned object